The Rey de Reyes 1998 tournament could not have been obtained by a more representative, symbolic and archetypical character for AAA image than none other than Octagón, the Master of the 8 angles. After snatching victory from Perro Aguayo, Cibernético and Latin Lover, the wrestler from Veracruz obtained the valuable Crown on this second edition of the tournament.

The date: March 1st, 1998 at Toreo de Cuatro Caminos. This event had at its center one of the factions that, in a very short time, had become the focus of the AAA spotlight: Los Vipers, whose leader was none other than El Cibernético. On the road to the final match, a long list of contenders fell one by one: Máscara Sagrada Jr., Hong Kong Lee, Fuerza Guerrera, Hijo del Perro Aguayo, Máscara Sagrada, Shiba, Blue Demon Jr., Black Demon, El Cobarde, The Killer, Electroshock and the man who would later become the 4-time champion of the Rey de Reyes tournament: La Parka.

One of the most polemic situations in all AAA story took place in this tournament: TV Reporters Antonio and Jorge Brenan, Los Gemelos Brenan (The Brenan Twins), dared to challenge wrestlers Abismo Negro and Pentagón (the second wrestler to use the name) on a caged match. This was the 2nd time they faced each other, and it went down so badly for the then extremely popular twins, that in an even worse turn of events, Abismo Negro put an end to the wrestling aspirations of Jorge, after he performed a Martinete on him, leaving him severely injured. This action earned him the nickname “El Rey del Martinete”, a name that accompanied him until his untimely demise in 2009.

Wrestler Heavy Metal defeated Sangre Chicana in a very violent match, after which the winner had to hold down the defeated warrior, in order to have his scalp, as such was the punishment for losing the match.

During the event, a mysterious “Man in black” showed up. This same man had been appearing in numerous AAA events, and in his most recent ones did so wearing the mask of Wrestler Máscara Sagrada. 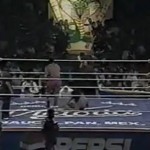 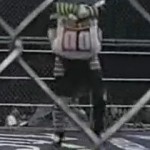 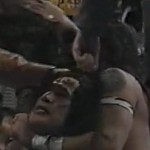